Chase You Down Until You Love Me, Puhpuh-Puhpuhrazzi

Bangkok. My idea of shopping paradise.

So, the usual 55-minute flight from Vientiane to Bangkok was turbulent because it was raining. After the long queue of passport control, my luggage was the only thing left going around the carousel –really, it wasn’t turning out to be a good night. I found my parents waiting for me at the exit, waited for the cab driver who was, apparently, waiting for us at the third floor of the airport, ergo the carpark. The 30-minute roadtrip to Kasetsart University was a breeze, almost surprised because roadtrips are not the same in Bangkok without the traffic jam.

The next day, my one and only day to shop –together with my mom and her students, we navigated our way to Platinum Fashion Mall. Damn, I still know my Pratunam! The difference four years makes in that mall. When we went there in 2006, it was newly-launched. Some floors were empty and they weren’t a lot of people going around. But that day? You cannot even walk pass the aisle without bumping to a woman pulling a stroller with a huge-ass sack. Yes, darlings, this is WHERE your clothes come from. Pretty cool, huh?

You know, if I were the one pulling that thing --it won't be for any business of some sort LOL

Back then, you will struggle to haggle the prices –now, just when you’re about to open your mouth to ask for the price, they tell you straight: If you buy three, I give you wholesale *sic*. Some shops actually give in even if you buy two pieces. I bought some stuff for my Hua Hin trip coming in two weeks, which made me more excited. I spotted two satin-y blouses from one store but I figured it wouldn’t work for my trip, so I decided to get them when I come back. I am breaking my own rule, you know.

When in Platinum..once you see something, go get it. Because once you try to go around and canvass, most likely, you will forget where you saw the product –or when you come back, it’s sooo gone. 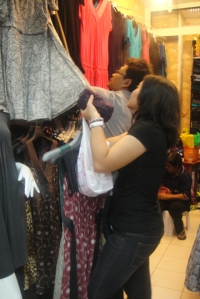 Rule of Thirds : Buy THREE to get the wholesale price. Looking for one more.

I am such a law-abiding shopper, at least in purchasing and not with the shooting-rule, obviously. HAH

I hope the blouse is still there. Wishful thinking.

Tawandang German Brewery. Famous for its fine beer. And good food. And amazing performances. It also serves as host for big concerts.

Known for their own brewed beer. It was good.

This is what you go here for... 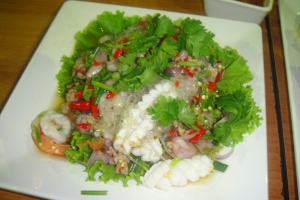 For a (semi)vegan, I just pick out the meat and eat the rest.

Green noodle? NOT. This is shredded water morning glory sauteed in garlic and oyster sauce.

Difference between tamakkhong of Thailand and Laos - Thai style has no fish sauce. I like my salad with fish sauce. 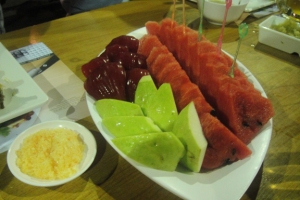 All ends with a fruit platter. 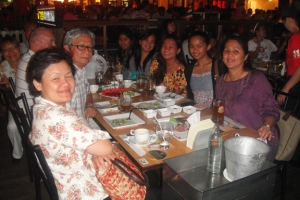 Professors from KU, my parents, and my mom's students 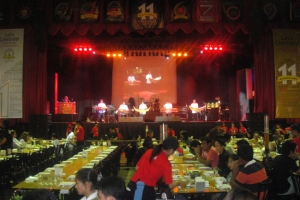 Amazing performances from their very own

My attempt to map the hall out

—
Then the next day was scheduled for my very first speaking engagement. I talked about Social Media, Development and my Digital Natives experience to Master in DevComm students of Kasetsart University (KU). It turned out pretty well. I mean, I’m not the speaker-type but it’s good that we were speaking the same langauge –DevComm, that is.

Discussing about Social Media, Development and my Digital Natives Experience 🙂 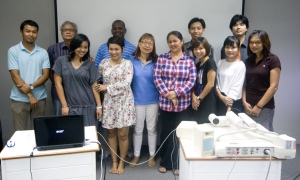 I blocked the signage, didn't I?

After the lecture, we went straight to the airport. Oh, Bangkok…See you in two weeks! “Promise, I’ll be kind(er)”

Filed under Food and Dining, Walk and Talk